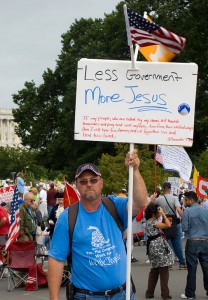 One of my former seminary professors, Glen Scorgie, recently posted an article accusing politically conservative Christians of “exploiting” Billy Graham by getting him to endorse (Glen says “allegedly” endorse) Mitt Romney over Barack Obama in the upcoming presidential election. (As Glen is Canadian, he will not be voting for either.)

I initially limited my response to a one line, “Just a brief note of my wholehearted support for…the right-leaning pastors politicizing their pulpits. You go Shadow Mountain!” Noticing today that no one had yet left any other comments, I decided I should offer a more substantial response. That response follows (below) and will also be posted as a comment on Glen’s article. As Glen’s site does not appear set up yet to notify those who post comments when or if their comments pass moderation, or when or if Glen or other site visitors post responses, it is unlikely I will respond to any follow-up comments there unless the person posting them also posts a notification here (or my site gets a pingback).

Visitors to Glen’s site should be warned that an effort to correct typos without an ability to edit a comment awaiting moderation resulted in my posting new versions of my comments with successive typo corrections. While Glen is a trustworthy Christian gentleman (albeit one with whom I often disagree) who would not intentionally approve any but the final, most-correct version of my comments, it would be possible for him to do so unintentionally. (By the way, an interesting article on the Graham-endorses-Romney controversy may be found here).

Introduction accomplished, here is my post (modestly improved over the last version submitted on Glen’s site):

Hi, Glen. Since I see no other comments on your post yet, I thought I’d try to offer more substantial comments. I am posting this both here and on my own site: [link to the page you’re now reading].

On the subject of “willfully tarnish[ing]…reputation[s],” I note that, by presenting personal suspicions and distaste for political conservatism in lieu of evidence, you seem to willfully tarnish (subtly libel) politically conservative Christians who, for all your (lack of) evidence indicates, may well have acted in good faith. Isn’t assuming the worst about the motives of one’s fellow Christians bad for spiritual formation? Though I’ve not had the pleasure of reading your writings on Christian Spirituality, I can’t help but wonder if some of them might contain rules for properly sanctified thinking that you’ve violated in your post.

Whether or not your attribution to conservatives of dishonest “shenanigans” signals that your spiritual formation isn’t what it should be, I would note that there are good reasons for Christians normally inclined to remain aloof from politics, Billy Graham among them, to seriously consider voicing their support for a candidate (Romney) and party (Republican) seeking to remove Barack Obama from office. Obama is not merely “pro-choice” in the standard Democratic-party sense (which is bad enough); he is the most radically pro-abortion president ever elected (Melbourne-born philosopher Peter Singer having never been eligible to run). Obama’s insanely pro-abortion record has been documented by LifeNews. See also this article.

I would suggest that for someone to at once claim to be a Christian, as Obama has, and to support the abortion policies Obama has supported, in fact makes that person guilty of blasphemy. We are not just dealing with a man who has erred on a minor side issue, or on a major issue in a minor way; we’re dealing with a man who has, while naming the name of Christ, opposed every effort to protect the unborn he’s had opportunity to oppose (even opposing “born alive” legislation to protect lucky survivors of abortion). Christians who vote for this man knowing his record are, I can’t help but believe, manifesting the profoundest possible moral blindness (if not outright rebellion, but I’ll refrain from my own game of negative motive attributions). Do you really believe that Obama is so right on one or more of the “host of moral issues” you mention that voting for him in spite of his anti-life record is justified? (Never mind his newly “evolved” support for homosexual “marriage.”)

In passing, I should also note that Romney is quite moderate and has a history of willingness to compromise with those on the other side of the aisle. (No doubt this is why doctrinaire Christian Right types like myself resigned ourselves to Romney as late in the primaries as we could, after all the candidates we really liked dropped out.) This is another thing about Romney that might have made him appealing to Billy Graham, who (as your article makes evident) has long been quite moderate himself (and a registered Democrat, if memory serves).

I agree it’s a shame that some conservative Christians are willing to downplay “the serious doctrinal deficiencies of the quirky Mormon faith” in order to avoid biasing anyone against Romney; the gospel must have the preeminence. If conservative Christians are unwilling to say, “We believe Romney’s religion is false, but his values, and his application of those values to politics, agree with ours sufficiently well to merit our support,” they should consider simply sitting out the election. However, be it hereby known that if a time comes when evangelicals decide that “let[ting] the church be the church” means telling Christians it is okay to vote for someone with Obama’s record on Life issues, then this non-young person will be declining to identify himself with the “evangelical” label any longer.

I’ve just (later on 28 October 2012) discovered that my “blasphemy” accusation, which some might judge extreme, has been made by at least one other person: my favorite preacher, John MacArthur.

MacArthur, by the way, finds the radical agenda in the Democratic Party platform, something one should note given my statement that “Obama is not merely ‘pro-choice’ in the standard Democratic-party sense (which is bad enough).” To clarify my point, I should emphasize that the radical stance of the writers of the Democratic Party platform, like Obama’s radical views, is far from the norm for rank and file Democratic-party members, whose more moderate views I label the “standard Democratic-party sense” of “pro-choice.” Still objectionable, from my perspective, but less extreme than Obama’s and the platform writers’ views.