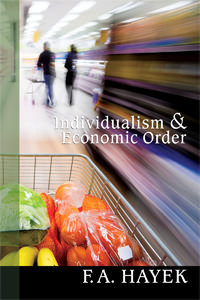 In a couple book reviews, I took issue with one author’s anti-individualist rhetoric and expressed gratitude (though not perfect satisfaction) for another’s effort to distinguish between different uses of the word “individualism.” I’ve just discovered that the use of “individualism” to refer to quite different things, so that true individualists may end up condemning and arguing against what they and others wrongly label “individualism,” is not a new phenomenon at all. In Friedrich A. Hayek‘s Individualism and Economic Order (Chicago: University of Chicago Press, 1948), which I discovered available as a free eBook from the Ludwig von Mises Institute’s Web site (2013 digital [MOBI] edition, ISBN 978-1-61016-605-8; also available in PDF and EPUB formats) and just started reading, one finds that “individualism” has been used to refer to both socialist-tending manifestations of what Thomas Sowell (in his A Conflict of Visions) calls the unconstrained vision and small-government-and-individual-freedom-emphasizing expressions of what Sowell calls the constrained vision. (I think of the unconstrained vision as the unrealistic, deluded, and arrogant vision; the constrained I see as more realistic/undeluded, more humble, and certainly more compatible with Scripture’s estimation of the capacities of fallen and finite humans.) The latter Hayek calls true individualism, the former false. As for why he insists on retaining a term that has come to signify so many different things to different people, he writes:

there are two good reasons for retaining the term for the view I mean to defend: this view has always been known by that term, whatever else it may also have meant at different times, and the term has the distinction that the word “socialism” was deliberately coined to express its opposition to individualism (loc. 89)

In his footnote to this statement, Hayek relates that

Both the term “individualism” and the term “socialism” are originally the creation of the Saint-Simonians, the founders of modern socialism. They first coined the term “individualism” to describe the competitive society to which they were opposed and then invented the word “socialism” to describe the centrally planned society in which all activity was directed on the same principle that applied within a single factory. (loc. 470, note 1)

Hayek additionally notes that those wishing for details on the origin of the terms “individualism” and “socialism” should see his journal article, “The Counter-Revolution of Science” (Economica, VIII [new ser., 1941], 146)(Ibid.).

As I’ve said, I only just started reading this book, but I suspect that fellow survivors of left-liberal “social justice” courses, such as seem increasingly prevalent at Christian seminaries (I found left-liberal tendencies and promotion of socialistically-construed “social justice” prominent in “Christian Social Ethics,” in “Celebrating Diversity, Embracing Unity,” and even in “Spiritual Formation” courses at one school I attended), will find Hayek’s text an epiphany. This text, along with Sowell’s A Conflict of Visions, should likely be read by everyone who has been through, as well as by anyone who foresees future enrollment in, such courses.