Noah’s Ark & Other Boats: Responding to a Craigslist Post 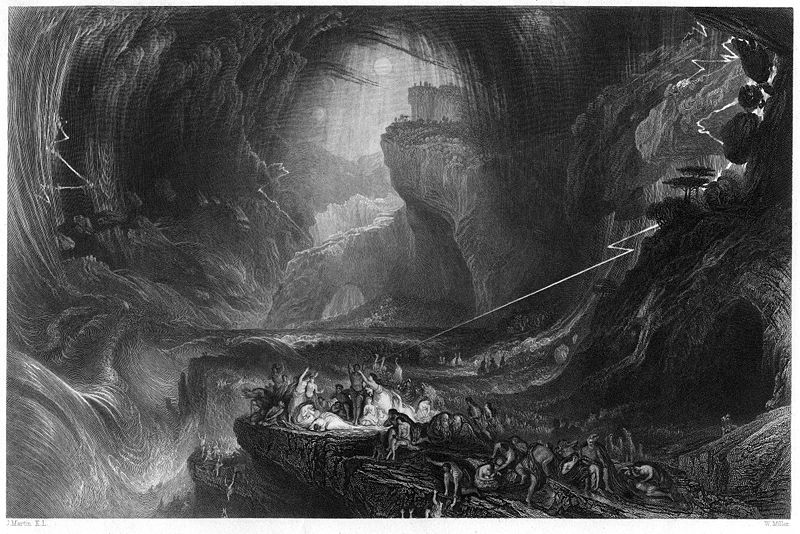 Re: abitwiser, “how the [expletive deleted] could Noah know with any” (posted 27 November 2013, accessed 28 November 2013), which rejects the Bible’s flood narrative based on the belief that other persons than Noah should have been able to survive, since surely there must have been other people with boats. Although the remarks that follow are addressed to Craigslist (CL) user abitwiser (as “you”), I have posted them here rather than on CL because (1) they might be of interest to site visitors and (2) the “Craigslist Terms of Use” are too broad and vague (offering, for example, no guarantee that remarks will not be modified or abridged when reproduced): “You automatically grant and assign to CL…a perpetual, irrevocable, unlimited, fully paid, fully sub-licensable (through multiple tiers), worldwide license to copy, perform, display, distribute, prepare derivative works from (including, without limitation, incorporating into other works) and otherwise use any content that you post” (emphasis added).

The Bible-believing position is not that Noah had any specific knowledge about the boats others had or didn’t have, but only that he followed God’s instructions in obedient faith. Did persons other than Noah have boats they used to try to survive the Flood? No doubt. No doubt persons did everything they could to survive as long as possible. However, the Flood account, written by Moses under God’s inspiration, indicates all such efforts failed: “And all flesh died that moved upon the earth, both of fowl, and of cattle, and of beast, and of every creeping thing that creepeth upon the earth, and every man: All in whose nostrils was the breath of life, of all that was in the dry land, died. And every living substance was destroyed which was upon the face of the ground, both man, and cattle, and the creeping things, and the fowl of the heaven; and they were destroyed from the earth: and Noah only remained alive, and they that were with him in the ark” (Genesis 7:21-23).

Though I’ve not read existing responses to your post, I do note with interest a couple wise titles, one suggesting that no other “boats” but Noah’s “could survive those seas,” the other pointing out that Noah’s Ark could only be called a “boat” “If the Battleship Arizona was a ‘boat.’” An essential point of the scriptural narrative is that both the decision to build the Ark and the exact specifications for how to build it were God’s, not Noah’s (Genesis 6:13-22). The Ark was a huge vessel: according to one estimate, “In modern units,…approximately 135m [442.9 feet] long, 22.5m [74.8 feet] wide and 13.5m [44.3 feet] high,” weighing around “21,016 tonnes” (“4,000 tonnes” for the vessel, “17,016 tonnes” for cargo) (S.W. Hong, et al., “Safety Investigation of Noah’s Ark in a Seaway,” 1994, accessed 28 November 2013). And, apparently, the ship took a century to build (in Genesis 5:32, just prior to being commissioned by God to build the Ark, Noah is said to have been “five hundred years old”; in Genesis 7:6, we’re told “Noah was six hundred years old when the flood of waters was upon the earth”).

While there were doubtless lots of other boats in the world, I doubt they could compete with a God-given design that took up to a century to complete. And the Bible portrays the Flood as anything but gently rising waters where any boat would do: “We read in Genesis 7 and 8 that ‘the fountains of the great deep’ were broken up and poured out water from inside the earth for 150 days (5 months). Plus it rained torrentially and globally for 40 days and nights (‘the floodgates [or windows of heaven] were opened’)” (Andrew Snelling, “Geologic Evidences for the Genesis Flood: Part I: An Overview,” posted 18 September 2007, accessed 28 November 2013). No one not possessed of the “divine madness” that possessed Noah would have considered building a vessel of the size or sort that Noah built. Even if some existing boats were sufficiently seaworthy, it seems unlikely the owners of those boats would have laid aside (or their boats would have been large enough to carry) sufficient supplies to ensure survival.

In case you really are interested in what Bible-believers have to say on this topic (the expletives in your post make me doubt this), the following resources may be of interest:

Concerning these resources, I should note that I do not endorse every assertion in them. For instance, you will run across a claim common among creationists, based on Genesis 9:2-3, that humans and animals were all vegetarians prior to the Flood (with, some allow, possible exeptions: Genesis 6:11). While this is possible, at least in the case of obedient humans who would wait for divine permission before eating animals, my own suspicion is that the post-Flood permission to eat animals (as well as animal fear of humans) must be just a formal restatement of a preexisting permission (and pattern of animal behavior) dating to the Fall. (Persons with greater knowledge of Hebrew than I have tell me this is a permissible understanding of Genesis 9.) Immediately after the Fall, God set the divine example of killing animals for clothing (Genesis 3:21), and it is clear that he also established the propriety of killing animals as sacrifices to him (Genesis 4:4). Are we to believe that God permitted humans to kill animals for clothing and for sacrifice, but not for food? This may be possible (perhaps a vegetarian diet was healthy prior to the Flood in a way it is not healthy today), but it strikes me as unlikely. Certainly, being killed for clothing and sacrifice would have made animals fearful of humans, even if the humans didn’t also eat them (as the disobedient humans contributing to the violence of Genesis 6:11 surely did), so a miraculous divine removal of fear would have been required to bring animals to the ark, contrary to the claims of those who think there is some value in minimizing the miraculous element of the ark narrative. (Aside: two things frequently found in the most degenerate cultures are human sacrifice and cannibalism, so I suspect the corrupt pre-Flood culture whose violence is noted in Genesis 6:11 in fact killed and consumed a broader range of lifeforms than we do today.)

Re: “value in minimizing the miraculous element of the ark narrative.” As the summaries of Woodmorappe’s feasibility study indicate, Woodmorappe and those who promote his work prefer to “naturalize” explanation of the Flood-and-ark narrative as much as possible. For instance, in his 2007 summary (the more complete of the two, since it includes presenter’s notes), Jason Browning emphasizes that “We must remember that Noah and his sons were smart people, and that they had a long time to prepare for the voyage” so that “Extensive planning took place,” part of which “planning was to design suitable enclosures for different types of animals” (Browning, “Noah’s Ark: A Feasibility Study: An Overview of Noah’s flood, and the ark as described in the book by John Woodmorappe,” slide 13 notes [accessed 01 December 2013]). The assumption here seems to be that God’s guidance in the ark’s design was limited to the directives recorded in Genesis 6. My own inclination is to think that if God were going to tell Noah the exact dimensions and building materials to use, he would doubtless also specify many other aspects of the design, making the cleverness and creativity of Noah and his family irrelevant to the project. Genesis is an intentionally brief summary of ancient events; many details we curious moderns might like to know simply aren’t included. (For instance, when did God instruct humans to make sacrifices to him, as Genesis 4:4 suggests he must have done?) When reviewing “minimizing the miraculous” exercises like Woodmorappe’s, it is important to keep in mind that these proposal about how “it could have been done” do not necessarily describe how it was done. Their sole purpose and value is to show that common skeptical objections to the Genesis narrative lack cogency.

Also, re: Woodmorappe. A search engine query will quickly uncover the assertion that “John Woodmorappe…is the pen name of Jan Peczkis” (as popular-but-not-always-trustworthy Wikipedia words it, citing Tom McIver, Anti-Evolution: A Reader’s Guide to Writings Before and After Darwin [John Hopkins University Press, 1992], 88), along with various sites claiming that one should doubt the validity of Woodmorappe’s feasibility study because of this use of a pen name and because Woodmorappe has published under his real name papers inconsistent (it is alleged) with biblical (“young earth”) creationism. Like many, I do not greatly respect persons who hide behind pen names, blog handles, or other cloaks of anonymity; but I also know that arguments must be assessed based on their own merits, not on who happens to make them or on that persons’ willingness to own the arguments publicly under his real name.

Thank you for reading.