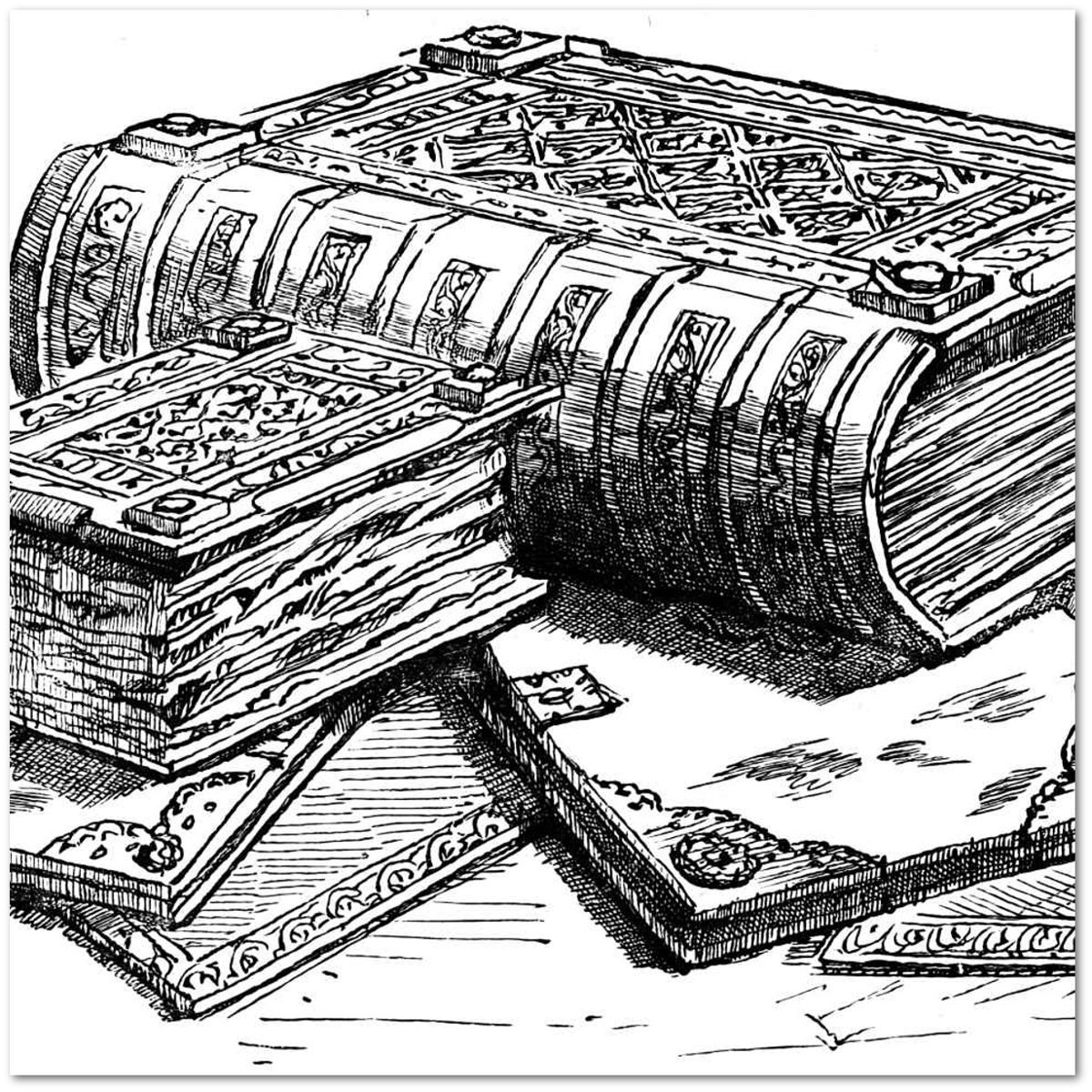 An author who makes a point of quoting both Charles Darwin (116) and Peter Enns (112) obviously moves in different theological circles—and holds different ideas about Scripture’s inerrancy, clarity, and sufficiency—than I do. (I’m a Reformed Baptist and biblical creationist who still finds the late Edward Freer Hills’ arguments persuasive and agrees with most of what the Trinitarian Bible Society has to say.) As well, someone who thinks first of ecological causes, “social justice,” and immigration reform (193, 282) when contemplating what shared interests and goals might form the basis of “doing life” groups—“witnessing communities” founded and led by Christians but seeking to serve, and inviting participation by, “not-yet-Christians” (137)–probably holds rather different political convictions than mine. (While not all my political convictions are settled, I’m sufficiently “conservative” and “religious right” to find this list of causes, characteristic of the “religious left,” off-putting.) Since Being Church, Doing Life is a practical rather than doctrinal or political work, however, I tried while reading to keep an open mind about author Michael Moynagh’s suggestions.

I’m glad I did. Being Church, Doing Life is a treasury of creative outreach ideas, not all of which solid Bible-believers will wish to endorse or try themselves, but even the most suspect of which might prompt fruitful reflection on how believers can more effectively reach out to unbelievers, and support and encourage fellow believers (219-20), in various social, economic, geographic, and vocational settings. Observing how, since the Industrial Revolution, the church “as a community presence” has become “increasingly remote from the office, the café, the bowling alley, and other centres of people’s lives” (62), Moynagh asks, “how can the congregation represent the gospel to people if it is not present in their daily lives?” (35). The implied answer, of course, is that the congregation cannot. Moynagh’s solution, one he observes already being undertaken by many Christians, in sufficient numbers to constitute a movement, is for groups of Christians to go out and found “witnessing communities” where people “do life.”

Moynagh considers such communities, not just forms of weekday outreach by persons committed to standard Sunday-meeting churches, but as themselves each (ideally) an “expression of church,” a “different kind of church” (67). “Churches,” he writes, “are emerging not just in community centres, but in pubs, schools, gyms, workplaces, sports clubs, and other settings” (63). While some Christians may continue attending a standard weekend church, the sort of witnessing communities Moynagh promotes often “become church for those who attend,” even “their sole church” (42). In fact, that such communities “At their best” must “provide a taste of church for people involved,” meaning they must engage to some extent in corporate worship (such as common prayer and observation of the Lord’s Supper), is among the four characteristics he deems essential for such communities. The community must, as he puts it, be ecclesial. Additionally, it must by missional (“work mainly with people who do not attend church”), contextual (“find culturally appropriate ways of reaching people”), and formational (“aim to form disciples”) (41). Moynagh likes to call these “fresh expressions of church” (151). He’s even part of a “national Fresh Expressions movement” in the United Kingdom (promotional email from publisher, 07 July 2014).

At this point, reflection suggests a difficulty. Moynagh recognizes (216 ff.) the need for Christians to alternate between engagement with the broader culture of not-yet-Christians (unbelievers who, of course, may never become Christians) and withdrawal from that culture for corporate Christian worship, including instruction in the Word and other things standard Sunday-meeting churches focus upon (those, at least, I note, that are not so “seeker-sensitive” as to have become perpetual evangelistic outreaches providing little special attention to already-Christians). Throughout the text, Moynagh proposes that not-yet-Christians be welcomed and encouraged to participate in the witnessing community. (Seeker-sensitive churches also emphasize participation by not-yet-Christians, calling it “belonging before believing.”) This would seem to make these communities (like highly seeker-sensitive churches) little suited for Christians’ restorative and preparatory periods of withdrawal. Yet, Moynagh suggests that “New believers can withdraw into the witnessing community for worship and to learn about the faith” (217). Witnessing communities’ function of reaching out to and engaging not-yet-Christians is not obviously compatible with the proposal that they also function as places to which already-Christians may withdraw for worship and instruction.

Worship practices in the witnessing communities (like those in seeker-sensitive Sunday churches) are to be tailored to the audience, of a form that feels “authentic” to it, that does not make attendees “feel awkward” (192). The community’s “style of worship” must not be “out of sync with the culture of the people it plans to serve” (160). While tailoring evangelistic outreach to the interests, aesthetics, and schedules of not-yet-Christians (75) may make biblical sense (1 Corinthians 9:19-22), an argument can be made that corporate worship and fellowship for already-Christians should require some effort, and perhaps involve both inconvenience and aesthetic adjustment. Once one has entered God’s kingdom, one must begin a process of adjusting one’s preferences and lifestyle to kingdom norms. Take music, for example. Music in corporate worship and at non-evangelistic Christian gatherings should not (this argument holds) mimic the world’s music, but try (insofar as scriptural guidance and sanctified reflection permit) to praise God in a manner of which God would approve, and through which Christians’ emotions and aesthetics might be slowly molded to a heavenly norm. I don’t propose in this review to determine what forms of “worship music” are truly suitable for corporate worship (positions vary from permitting psalm singing only, to permitting anything “traditional,” to permitting everything one can label “Christian”), only to note that when considering this subject of music, as when considering any other aspects of Christian corporate action, a distinction must be drawn between outreach activities, which it is hoped not-yet-Christians will participate in and find to some degree attractive and agreeable, and corporate worship, where already-Christians are to receive instruction and join in other acts of worship in a God-centered and Scripture-guided fashion neither unbelievers nor backslidden believers should find appealing. (Convicting and discomfiting? Yes. Appealing? Not so much.) Received instruction should be of a sort requiring significant preparation, strongly scriptural preaching/teaching, not just such “simple and brief” talks as Moynagh suggests could suffice in witnessing communities (174).

Moynagh, of course, might not agree that there is ever any problem with Christian worship practices mimicking a surrounding culture’s style. He assures members of various cultures, “Your cuisine, music, clothes, social habits, and general pattern of life are not embarrassments, to be jettisoned as you become more like Christ” (113). Those who see this mimicry as problematic would note, however, that Moynagh’s assurance claims more than Scripture warrants: surely some music, some styles of attire, and some social habits do run contrary to divine preference. As well, they would add, corporate worship of God is not merely an extension of the day-to-day conduct of one’s life, but a special exercise deserving special treatment. After all, though God always intended to bless all nations through Israel (Genesis 18:18, 22:18, 26:4, etc.), he never displayed much tolerance for Israelite mimicry of the broader culture’s worship practices (Exodus 32) nor, in fact, for any worship practice (however sincere or heart-felt) he did not explicitly authorize (Leviticus 10:1-2). Corporate worship must focus on God and his requirements, not on the feelings, preferences, and habits of human worshipers.

Moynagh recognizes that “Some Christians worry that, in trying to connect with the surrounding culture, Christian communities risk selling out to that culture and soft-pedalling the costly demands of the gospel” (112), in particular, I would note, the gospel’s demand that one bring every thought into obedience to the full inerrant counsel of God (2 Corinthians 10:5; 2 Timothy 3:16). (Moynagh’s false dichotomy, “Jesus did not write a book but formed a community” [35], might suggest weakness in this area, as it seems to downgrade Scripture’s importance. Since Jesus is God and Scripture is God-breathed, Jesus did in fact write a book, as well as form a community.) The sorts of witnessing communities described and encouraged in Being Church, Doing Life do seem to risk exactly this by failing to make any strong and obvious separation between corporate worship and general outreach. Moynagh’s own counsel sometimes seems to contribute to this risk. For instance, he wants witnessing communities to do all they can to accommodate people in “our low-commitment culture” (145), who “prefer to be on a journey rather than reach a destination” (142), and wants them to avoid “a subtle superiority that puts others off” created when any church (standard or “fresh expression”) “assumes it has a gospel that everyone else needs” (167). In this softest of soft-sell approaches, one doesn’t press for commitment one way or the other (Joshua 24:15), but simply starts discipling—hence the inclusion of both not-yet-Christians and already-Christians in the various activities of the witnessing community. “Even if an individual never comes to explicit faith,” Moynagh states, “he or she may have become more like Jesus” as a result (179). Doesn’t this approach soft-pedal the costly demand to “repent…and believe the gospel” (Mark 1:15)?

This difficulty aside, if a movement at once (1) makes the positive influence of Christian community more pervasive in the lives of believers by situating Christian communities in places of work and leisure beyond traditional church services, and (2) ensures gospel witness’ presence in various niches of life through the same communities, then that movement can’t be all bad. While scripturally questionable practices, shallow or erroneous teachings, and other products of undisciplined experimentation might arise at times, perhaps even frequently, they do not negate the fundamentally positive nature of the movement. Neither does the difficulty I’ve noted negate the positive value of Moynagh’s how-to book for would-be participants in the witnessing communities movement. Christians looking for creative ways to live out and share their faith in their everyday lives should find much of value in this interesting text.

This review also appears on Goodreads and, less nicely formatted, on Amazon.