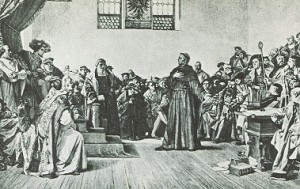 My Mormon interlocutor, Linda, was not persuaded by my remarks. See her response on the discussion group’s page. My response to her response may be found on Yahoo! Groups and, in improved form, below. (My tracking of discussions outside this site, whether on Yahoo! or elsewhere, is occasional at best. I therefore urge persons wishing to discuss these remarks to comment here, or at least to note here that they’ve commented on Yahoo!.)

Thank you for the response, Linda.

I don’t think I agree that “The Bible makes no reference at all to the Bible.” In John 16:13, Jesus promises that the group of disciples alive there as he speaks, the founding generation of the New Testament church, in particular the apostles, would be guided by the Holy Spirit “into all truth.” This appears to me to promise a rounding out of existing written revelation into something comprehensive, something meriting the label, “all truth.” Though obviously a collection of all facts in creation could not be meant, it seems quite reasonable to expect a completed assemblage of inspired (God-breathed) truth needed to make “throughly furnished” (to fully equip) Christ-followers, a comprehensive source “for doctrine, for reproof, for correction, for instruction in righteousness” (2 Timothy 3:16-17).

Concerning the possibility of God-breathed writings that, in God’s providence, were not preserved for incorporation into the Bible (completed canon of Scripture), it should be noted that though the Bible says that “All Scripture is given by inspiration of God,” it does not say that “All given by inspiration of God is Scripture.” There is no “missing Scripture.” Based on such promises as that in John 16:13, I trust that God, in the person of the Holy Spirit, guided his people to recognize, receive, and preserve the writings he intended as part of the “all truth” collection that would supersede the prior piecemeal, now-and-then, as-needed system of prophets and apostles. Any inspired material, oral or written, that preceded the completion of the Bible but was not included in the Bible must have served a function for the time that the completed Bible would be able to fulfill later without including it.

Though it is hotly debated whether the passage in question is itself speaking about the pending completion of Scripture, the statement in 1 Corinthians 13:10 that “when that which is perfect is come, then that which is in part shall be done away” does lay out a clear principle with broad application: when God brings about the fullness or perfection of something, that newly perfected (completed) thing supersedes and eliminates the imperfect things that previously (and likely less well) fulfilled its functions. The “all truth” of completed (“perfect”) Scripture provides fully sufficient resources for the equipping of Christ-followers; therefore, such “in part” resources as apostolic and prophetic guidance, in accord with this principle, should have been done away. I believe that they were.

Whether or not you find this way of understanding the issue persuasive, I find it a coherent and cogent one, and one that does not leave me dependent upon present-day human “authorities” professing access to direct communications from God. That God should ordain that his own words be set down in writing, then fail to ensure that those writings be received and preserved among his people, or fail to ensure that those writings are capable of being understood by the faithful, does not seem to me a credible proposal.

After the “missing Scripture” discussion, you move on to note the wide divergence of opinions among persons professing “to preach from the Bible” (and the variety of churches established based on these divergent opinions). From this divergence of opinions, you conclude that “The Bible is rather ambiguous.” I don’t think that follows. Disagreement among interpreters could only be taken to prove lack of clarity in the document interpreted if that document were of an uncontroversial sort that sinfulness would never motivate anyone to interpret wrongly. The Bible is emphatically not such an uncontroversial document. Human sinfulness has long enabled us to wrongly interpret very clear statements. (I would also note that there is a certain irony in your pointing to multiple non-LDS churches forming over differences in doctrine given that what began our dialog was my curiosity about why the Mormon church permits its members to hold such a wide variety of views on what seem like quite important matters of doctrine. Were non-LDS churches as tolerant of variant doctrinal beliefs, they too could all meet in one building and call themselves one church.)

After suggesting the Bible is ambiguous, making additional revelation necessary (I take you to mean), you next make a set of statements that seem to deny all ostensible written revelation of real authority. “The Bible may have been inspired by God, but it was written by MEN,” you write. And, “the Bible is no more perfect than the men who brought it about.” A host of unbelievers who value the Bible as “fine ancient literature” would give you a hearty “amen” for these statements. Likewise, professing Christians who prefer to pick and choose what in the Bible they personally like or don’t like, what they find edifying or not-so-edifying, might likewise “amen.” My question, though, is this: in what relevant sense can a book “no more perfect than the men who brought it about” function as a revelation from God? Would a Jesus who sinned like all other men be qualified to do the saving work on our behalf that Jesus did? How, then, can a book that errs like any other human book do anything more than any other “fine literature” produced by humans? I’m sorry, I just don’t see how your concept of Scripture leaves Scripture anything but one more religious book we can draw selectively from as our subjective impulses lead us.

To your credit, you do not attempt to apply a double standard when it comes to the Book of Mormon. You write: “We also believe the Book of Mormon to be the word of God. No,” you add, “we do not believe it to be perfect. It, too, is no more perfect than the men who are responsible for [its] existence.” So, it seems that you see the Book of Mormon, like the Bible, as a work that mixes together the pure and perfect words of God with the erring sinful words of fallen humans. It is up to us, sinful human readers, to pick out the true and false in these documents for ourselves, it would seem. There is in the Book of Mormon “much to be gleaned…to live a happy healthy life, and even to be a better parent,” and presumably you see the same sort of “gleaning” as required in the case of the Bible. Concerning this “cafeteria buffet” methodology, I can only ask: doesn’t this whole approach place ultimate authority in the mind of the human “gleaner,” removing God’s authority entirely? How is this approach any better than building a life philosophy on collected quotations from any selection of human books one happens to find edifying? Why prefer the Bible or Book of Mormon?

When you later state that “If there are any [seeming] contradictions between the Bible and the Book of Mormon, it’s in your interpretation, because I have found they work beautifully together.” This would be a sensible statement to make were you arguing that both the Bible and Book of Mormon are infallible divine revelations that must not contradict one another. However, since you’ve previously identified both books as imperfect works marred by human error from which we must “glean” the good and true, I don’t see why you make this statement. If neither is perfect, then contradictions between them are irrelevant: imperfect human documents, like imperfect humans in general, contradict each other all the time. No worries!

In sum, it doesn’t seem to me that your approach to scriptural authority is tenable. To my eye, you seem to be functioning as your own ultimate authority, accepting purported words of God as true or false, correct or in error, as it suits your subjective sense of goodness, happiness, rightness, and so on.