My Sad Farewell to Vimeo, with Protest and Reflection Suggestions 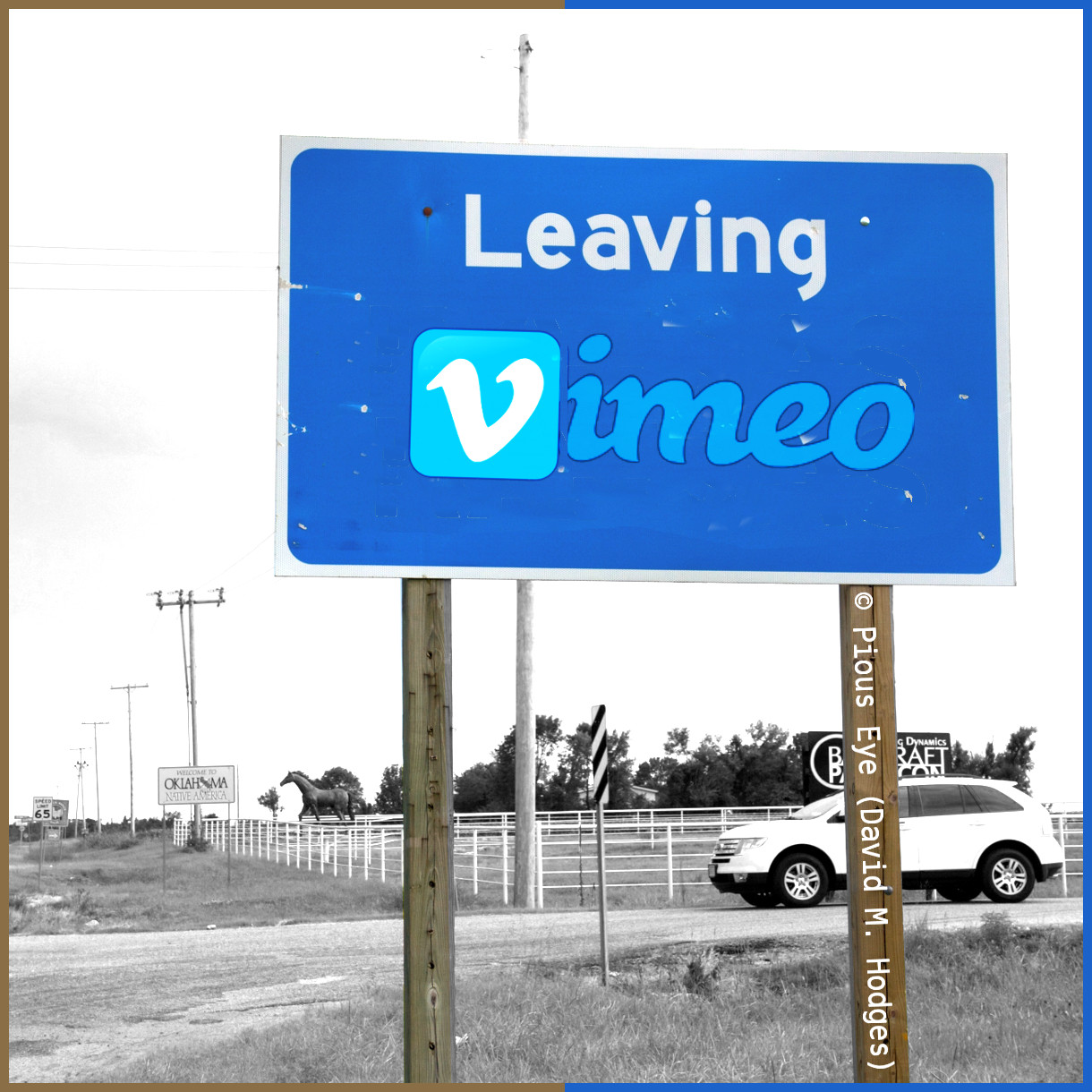 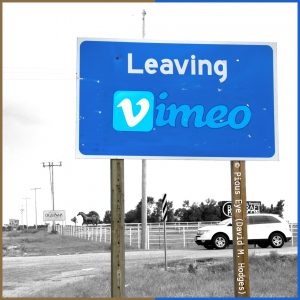 One disturbing thing about the rise of the World Wide Web as people’s main source of information is that, though sites like Vimeo and Facebook, and search engines like Google, may appear to provide unhindered access to the free expression of any viewpoint by anyone, the assorted for-profit companies mediating access to information over the Web are both (1) free to block or hinder expression of (and access to) opinions they dislike, and (2) increasingly making use of this freedom to suppress Bible-compliant perspectives in favor of the secular, anti-Christian, anti-biblical values they prefer. Certain of Vimeo’s actions, about which the American Family Association (AFA) recently informed me, are a good illustration.

At the end of March 2017 (when I’m writing this post), I received an AFA update concerning streaming-video service Vimeo’s closure of Pure Passion Ministries’ account, along with an invitation to sign an AFA petition (accessed 30 March 2017) with the following wording:

I am outraged to learn that Vimeo has closed the account of Pure Passion Ministries and removed its videos.

Pure Passion is a compassionate Christian ministry whose videos help sexual abuse victims, people who have been sex trafficked, and those who are addicted or in any other condition that causes them distress.

I am appalled at the prejudice Vimeo has taken against Christian values and for censuring the attempts of Pure Passion Ministries to serve others.

I urge Vimeo to reverse its decision [and] to restore immediately the account of Dr. David Kyle Foster and Pure Passion. To not do so is tantamount to religious censorship.

I admit, I’m never happy when AFA “take action” advisories come to me in the form of petitions with one-size-fits-all wording. I’m much happier when AFA sponsors direct-email campaigns where I can modify the AFA copywriters’ wording to suit my way of thinking. As has often been the case in the past, I was not able to sign this petition. (I guess I’m still not one who can join group movements.) For one thing, I dislike filling my communications with statements like “I am outraged,” since “I am made to squirm” by this emotive manner of expression. (While I may often be outraged, occasionally for reasons compatible with true piety, I can think of no instances where saying “I am outraged” would strengthen my position.) For another, I don’t know anything about Pure Passion Ministries and its videos beyond what AFA has told me, so I’m not willing to assert that its videos “help” viewers. (Maybe they do; maybe they don’t: I don’t know.) At any rate, whether the videos “help” anyone or not, and whether Pure Passion qualifies as “compassionate” or not, seems to me quite beside the point. Would it be okay for Vimeo to remove videos determined not to really “help” anyone or to not be sufficiently “compassionate”? Would it matter what belief system’s definitions of “helpful” and “compassionate” were used, or could Vimeo use any it liked? (As well, for reasons I’ve noted previously, I don’t like saying people are “addicted” to their behavioral problems, though the reference to “those who are addicted” would not by itself have prevented me from signing.)

AFA’s update included a link to a summary of matters by Michael Brown (“Vimeo Declares War on Gospel Transformation,” AFA.net, posted 28 March 2017, accessed 30 March 2017). It merits reading. I would call readers’ attention to Vimeo reps’ (and Vimeo usage guidelines’) use of such malleable terms as “harass,” “incite,” and “demeaning” to permit censorship of views with which Vimeo disagrees. (Presumably, this means views with which most on Vimeo’s board of directors disagree, since a company cannot legally impose homogeneous beliefs on its employees.) I must applaud David Foster, Pure Passion’s director, for eliciting the admission from Vimeo rep Sean M. that Vimeo “disagrees wholeheartedly” with anyone asserting that “homosexuality is a form of brokenness, or something that requires healing, or something that people need to seek freedom from,” and that for this reason Vimeo will remove videos posted by, and will close the accounts belonging to, those who endorse one or more of these politically incorrect, Bible-compliant opinions. Vimeo is not the public square; it is not a place for free and open exchange of ideas and debate about opinions; like the public schools, like many universities both public and private, and like various “sensitivity” courses your own employer or school might have required you to attend, Vimeo is a tool for promoting a specific secularized value system that “tolerates” (more correctly, celebrates) all manner of public perversion while condemning any attempt to apply biblical or Christian values to anything but one’s own private activities.

Given Vimeo’s past and present misdeeds, by which I mean just those summarized in Dr. Brown’s article, AFA’s call upon supporters to “urge Vimeo to reverse its decision [and] to restore immediately the account of Dr. David Kyle Foster and Pure Passion” seems to me to fall short. The time seems to have come for Bible-believing Christians to stop using Vimeo altogether. For my part, I’ve given Vimeo’s Roku channel the lowest-possible (one-star) rating and deleted it from my device, and I plan to delete my two Vimeo accounts as soon as I’ve communicated to Vimeo why I’m doing so. (I do understand that this is less easy for those of you who have videos posted than it is for those of us who only have accounts for tracking and sharing videos we like or plan to watch later.)

On the subject of contacting Vimeo, I note that the online contact form provided by Vimeo and linked to by Dr. Brown’s article requires that one have a Vimeo account. If you ask me, this is no way to run a protest. Readers wishing to write to (or call) Vimeo should note the following information, which I found on bloomberg.com (accessed 30 March 2017):

The same site, by the way, notes that the company’s chief executive officer is Mr. Kerry Trainor and its president Ms. Dae Mellencamp. (It also identifies some other “Key Executives,” should you wish to address more than one or two.)

Should it seem worthwhile, I’ll post my own protest letter(s) here later. Until then, happy protesting!

Oh, by the way….All activism-minded Christians might wish to reflect, as I will, on whether or not, in light of the preceding, they should urge such companies as Vimeo to permit full freedom of expression. Many activist Christian organizations, AFA not excepted, urge supporters to call upon media companies to cancel television programs, reject advertising for products and services, and stop publication of materials that are offensive to Christians, are at odds with biblical values, and (in their, and my, judgment) are an affront to God. If Christians are going to act against full freedom of expression in such cases, may they justly criticize non-Christians who do the same in support of their agenda(s)? Perhaps the activists leading Vimeo and the activists leading such Christian organizations as AFA are correct to assume that one or the other set of values must be imposed on all by force—by force of public protest and commercial pressure if not by force of law. The idea that a nation of people with fundamentally different values can live peaceable, freely debating even the most basic moral issues (though perhaps not on the same company’s steaming video site, since some companies may choose, as Vimeo has, to serve partisans of only one side of a debate), may be a naive fantasy. Still, it is a fantasy many Americans find appealing, and one that will require much effort to overcome.


If this post is a review, it may also appear, less nicely formatted and typically abridged, on such other sites as Amazon and GoodReads. If this post has odd gaps in it, this probably means some ads have failed to display. If you miss the ads, try reloading the page. Otherwise, just enjoy their unexpected absence.